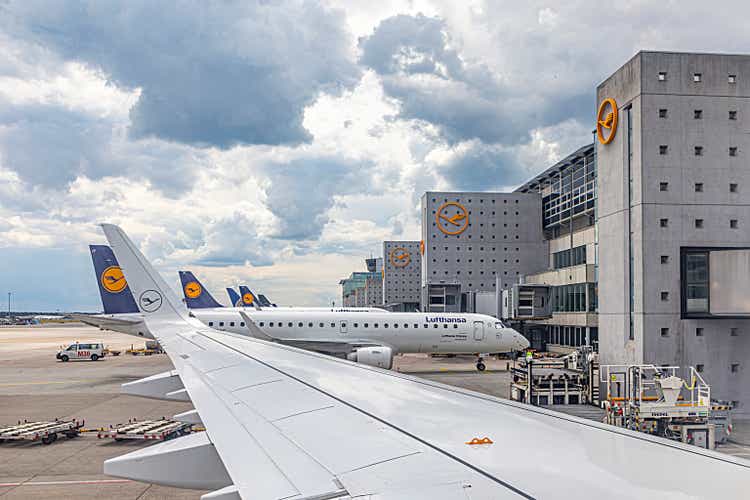 With the current strength of the US dollar, now is the time for US investors to consider international equities. An easy way to get exposure is to buy an ETF like the VanEck Morningstar International Moat ETF (MOTI). This fund is made up of blue chip companies, and investors entering at the current price will likely do well in the future. For those wishing to invest in a specific market, such as Germany, the iShares MSCI Germany ETF (EWG) is also a viable option.

As a stock picker, my preference is, of course, for individual companies. As a European investor, I don’t get the advantage of the USD exchange rate, but valuations have been good enough that I recently bought some German stocks: reinsurer Munich Re (MUV2.DE, OTCPK :MURGF, OTCPK:MURGY), airport operator Fraport (FRA.DE, OTCPK:FPRUF, OTCPK:FPRUY) and potash producer K+S (SDF.DE, OTCQX:KPLUF, OTCQX:KPLUF). These are long-term stocks, whose competitive advantages will, in my opinion, ensure superior returns for patient investors.

Munich Re: best reinsurer in its category

The environment has been difficult for insurers and reinsurers over the past two years. The pandemic has combined with costly natural disasters to reduce industry profits. The war in Ukraine has brought additional tension, with Western jets stuck in russia should be a hotly contested battle between aircraft leasing companies and insurers.

In this difficult environment, Munich Re (Muenchener Rueckversicherungs-Gesellschaft) continued to post solid performances, living up to its reputation as a conservatively managed reinsurer, as evidenced by its comfortable solvency ratio.

Going forward, natural disasters and new threats such as cyberattacks are expected to continue to increase, which has weighed on sentiment towards the industry. In reality, this should be seen as an opportunity for growth. Insurers have been disciplined and premiums have increased accordingly.

According to analysts’ estimates, the company is trading at a P/E slightly below 10 for 2022, and below 8 beyond, with projected earnings growing:

Munich Re paid a comfortable dividend, even if you have to take into account the c. German withholding tax of 26% – the impact of which can be reduced by a tax credit for countries that have concluded tax treaties with Germany, including the United States.

Of course, even the most conservative stocks face certain risks. A devastating natural disaster, or something going terribly wrong with the war in Ukraine, is always a possibility. For the record, Munich Re was the only insurer to remain fully solvent after the 1906 earthquake in San Francisco. There is no guarantee that it can withstand such an event in a densely populated area these days. Of course, the idea is not to put all your savings in the insurance/reinsurance space, and with adequate diversification I can’t sleep on the “Big One”.

To conclude on Munich Re, allow me to mention the in-depth analyzes that have been carried out recently by the authors of Seeking Alpha. They can be found here. Let me also mention another name I like in the European reinsurance industry: SCOR SE (OTCPK:SCRYY, OTCPK:SZCRF), based in Paris, is also trading at attractive levels.

While Munich Re derives its competitive advantage from size and reputation, our second name, Fraport, is a natural monopoly. The group operates several airports in Europe and South America, its flagship asset being Frankfurt Airport.

As shown in the table above, Frankfurt is fully owned, which is rare among airport operators who typically operate under fixed-term concessions. Fraport also has a significant government stake, which further secures its control over the asset.

The group has its own concessions, some of which are very promising. The portfolio of Greek airports, which Fraport will operate until at least 2057, will in my view surprise on the upside as tourism continues to grow in the region. Meanwhile, Brazil and Peru are emerging markets where air traffic is benefiting from secular tailwinds.

The impact of Covid-19 has obviously been huge on the industry, and Fraport has yet to recover its pre-Covid passenger traffic (unlike, for example, Mexican operators). This is why the stock is still trading much lower than 2 years ago, and this is the opportunity for those who think things will normalize – like me. Additionally, Fraport worked on its cost structure during the Covid crisis, improving its break-even point.

Analyst estimates point to a very reasonable valuation for this solid infrastructure game. 2022 got off to a slow start due to the lingering effect of Covid in the winter, but with moat companies like Fraport, investors have time on their side.

The main risk would be a sustained decline in air traffic, assuming business travel does not rebound and environmentally conscious consumers begin to shun the airline industry. en masse. I expect air traffic to continue to grow, with new technologies gradually improving the carbon footprint of aircraft, while carbon offsets offered by airlines and tour operators should give passengers a clear conscience.

Our third investment brings us to the fertilizer space. K+S AG is one of the leading producers of potash and, above all, the only major producer with production facilities in Western Europe. The European market is traditionally supplied by imports from Belarus and Russia. These have obviously been disrupted by the geopolitical context, with the EU reducing imports from Belarus as part of a sanctions package, and Russian exports being banned by the Kremlin as part of Russia’s own sanctions. against the West. Although these sanctions may be lifted at some point, I do not expect a full resumption of trade flows, which gives K+S a huge advantage as a local producer in Germany. Meanwhile, K+S has a modern facility in Canada, the Béthune mine, which, after a somewhat difficult ramp-up, is now contributing to the company’s performance. Given the favorable market conditions for potash – which were already in place before the war in Ukraine – K+S recently raised its forecast for 2022:

Current performance makes the company’s metrics very cheap. It is important to keep in mind, however, that fertilizers are cyclical – even if their cyclicality is different from that of the economy in general. In good times, a reasonably low P/E ratio is certainly appropriate. In the case of K+S, the evaluation is really undemanding:

The company quickly pays off its debt, effectively transferring value from the lenders to the shareholders. K+S is expected to generate nearly $2.5 billion in free cash flow over the next two years, which would add significant shareholder value given that the company’s current market capitalization is approximately $6 billion. dollars.

A full resumption of trade with Russia and Belarus, although unlikely, could weigh on potash prices. There will also be capacity additions by companies like Nutrien (NTR) and Mosaic (MOS) at their Canadian facilities – which could have an impact down the road (K+S itself plans to increase production at Béthune ). Another risk, mentioned by the management, would be that Russia cut off the natural gas supply to Germany in the near future, which would increase costs for K+S and would probably lead to a drop in production as well. However, that would be a headwind in the relatively short term, and I think the title’s safety margin is sufficient.

There are likely German stocks that could stage dramatic rallies in stock prices if geopolitical tensions ease and fears of an economic slowdown fade. Automakers or chemical companies could offer significant upside potential. However, the stocks I buy in Germany are the ones we just discussed because I believe their enduring competitive advantages provide long-term visibility and the ability to create a lot of value for buy-and-hold investors. .

Live News: Glencore to be taken to court for bribery and corruption