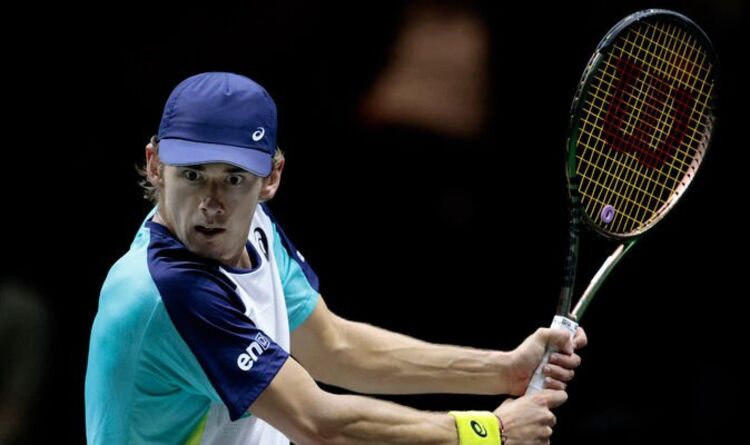 Australian tennis star Alex de Minaur has categorically denied reports that he has been named as an alleged client of an illegal fraud ring in Spain which supplies high-profile figures with fake Covid passports. The situation is under police investigation, with de Minaur one of several famous faces believed to have had dealings with the Covid passport plot.

These passes would be bought by unvaccinated people who would use them to circumvent the Covid jab rules.

Spanish police said the group’s leaders are based in France, and a total of 11 people have been arrested and charged with “forgery and use of forgery”.

An investigation found that a further 600 people are accused of fraudulently registering as having been vaccinated.

This brings the total number of people under investigation to 2,200, according to AFP, all of whom could have used a network on the social media platform Telegram to get in touch with the fraudsters.

Among the defendants are a number of well-known people in Spain, such as actors, businessmen and sports stars, including boxers, bodybuilders and a professional footballer.

Not all have been named, but the one whose identity has been made public is tennis star Minaur, who turned 23 on Thursday.

JUST IN: Emma Raducanu takes off “on an adventure” with the return of tennis a few days away

“Australian tennis player Alex de Minaur, of a Spanish mother and Uruguayan father, is one of the latest to be investigated as an alleged client of the fake Covid passport,” said said Spanish media Telemadrid in a report.

“The tennis player joins the list of top athletes, businessmen, musicians and actors who allegedly could have used the network that provided fake Covid and PCR passports.”

De Minaur denied the allegations, in a short statement posted on social media.

“I wanted to write a quick message here to avoid any misunderstanding regarding a report that is in the Spanish media about my vaccination certificate,” he wrote.

“I received my first dose of the vaccine in London last summer, and the second at La Paz Hospital in Madrid.

“News came out today that the hospital is being investigated for providing falsified Covid certificates to some of its patients.

DO NOT MISS :
Novak Djokovic slammed in the middle of the ongoing row of Covid vaccines
ATP slammed for ‘painfully stupid policy’ after star fine
Andy Murray beaten by Roberto Bautista Agut in Doha

“I want it to be 100% clear that I received my second injection, that I have a fully valid, accurate and truthful vaccination record. Everyone around me, including my family, is fully vaccinated .

“I am in no way ‘under investigation’ as suggested and my name is linked to this story simply because I was a patient in the hospital (as thousands of others were).”

De Minaur represents Australia when on the pitch, but otherwise lives in Spain, his mother’s homeland.

Ranked 32nd in the world, he is Australia’s top male player in the ATP rankings and has won six tour titles in total in singles and doubles competitions.

He appeared at the Australian Open last month, where players had to be vaccinated or have a valid medical exemption to travel Down Under for the tournament.

World No. 1 Novak Djokovic was unable to compete for this reason as he was eventually sent home after his long visa battle.

De Minaur reached the fourth round of men’s singles before being knocked out by Italy’s Jannik Sinner.

Any player found guilty of buying a fraudulent vaccination record would likely face severe punishment from the ATP.

A new rule introduced last year says players who submit a fake Covid passport could face a fine of up to £74,000 and suspension from tour events for up to three years.