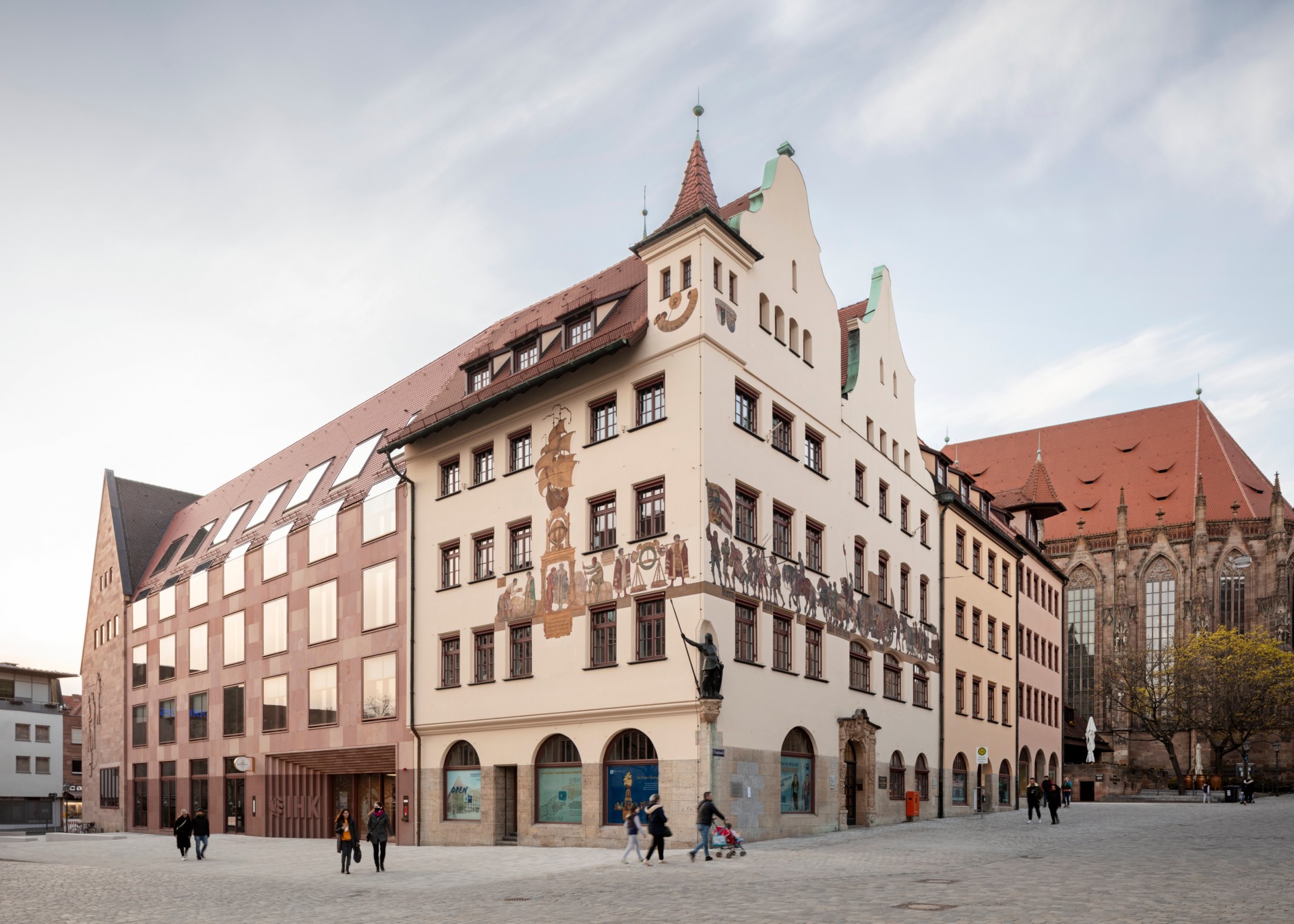 Nuremberg Market Square now has a new relationship with the Chamber of Commerce and Industry in the historic heart of the city. Following a competition, the project was awarded to Behles & Jochimsen Architekten of Berlin, who unified the image of a building that had been divided into several different and visibly discordant sections in the city while rearranging the interiors to connect them and make them more flexible.
A number of buildings have been demolished, while others have been renovated, restoring and technologically adapting their structures. By closing the curtain of buildings around the old courtyard, the architects connected six buildings using only two staircases and transformed the yard into a well-lit covered atrium to welcome the public and serve the office system. The restoration of the building’s prestigious facades and the creation of new ones with the characteristic materials of Nuremberg architecture form a link with the adjacent buildings, with the Church of Saint Sebaldus to the north and, above all, with the entire Hauptmarkt square. close.
The setting is the historic center of nuremberg, in the heart of the traditional commercial center of the city. IHK Nürnberg für Mittelfranken is not just an office building, it is a symbol of the economic power of the city. The complex already had a block layout around an open courtyard to the west. Among its many volumes of different ages, those of Waaggasse and Schulgaesschen, which were unprotected and had no significant architectural value, were demolished to allow the construction of new structures on the north-south axis, while that the buildings of Winklerstrasse and Hauptmarkt have been preserved. and adapted in response to new requirements.
Archaeological excavations at the project site, which lasted over a year, revealed that Nuremberg is 200 more years than previously thought.
The new volume on Waaggasse continues the line and perforation of the buildings of the historic city center, maintaining continuity with the adjacent roofs on the block of which it is part without distorting the rhythm and colors of the whole. It is only on closer inspection that one realizes that it is a contemporary volume, as revealed by the use of new cladding materials, the size of the windows and the staggered entrance to the square, revealing the relationship between the two urban places.
Upon entering the building, one finds oneself in a large atrium under a glass roof, with a view of the interior facades and all the office spaces on four floors. It is the reception area, the public face of the hemicycle, large and airy enough to host events and exhibitions.
The demolition of the buildings to the north and south allowed to complete the parts to create more spacious and flexible workspaces, improving the clarity of the interior layout and minimize level differences between existing floors. The attic at the top contains a number of offices and a staff cafe; the two reconstructed wings are connected by bridge levels to the east and west of the atrium, glazed so that the interior walls of the original buildings are visible. This form of continuous circulation between floors on the same level, and the use of the hall as a central distribution point, effectively connects all the buildings. Two main staircases lead to the floors, the building’s historic grand staircase on the southwest corner, next to reception, and a new staircase on the northwest.
While the roofs of the new central building are oriented east-west, those of the adjacent buildings are oriented north-south, creating a closed quadrilateral around the accessible roof. The partially glazed flat roof is designed to be a large roof terrace for the organization of parties and events. To establish a closer relationship with its urban environment and take advantage of the central position of the complex, the two strategic corners and the entire facade along the main market square are leased as commercial space; one of these spaces is currently the showroom of the Academy of Fine Arts in Nuremberg. On Waaggasse, next to the main entrance, there is a restaurant with a large outdoor terrace.

Continuing the appearance of the Saalbau to the west, the new facade is covered with natural stone cladding in two layers: a base of relatively dark, plain-coloured Wuestenzell sandstone, up to the same height as the adjacent lower part of the corner building of the large market, is topped with lighter Schweinstaler sandstone, the color of which feature gives a lively appearance to an otherwise smooth surface. Oversized windows are recessed into the stone cladding, with insulating space and frames of aluminum on the outside and oak on the inside.
At the eaves, the windows “bend” surprisingly with the angle of the roof, becoming skylights in their upper part. Inside the building, this solution creates bright spaces for meetings and private conversations with views of the city’s tallest monuments.
The interior design creates a warm and cozy atmosphere with the use of natural and resistant materials such as gneiss green rock in the atrium and Jura marble in the stairways and corridors, frequently used in historic buildings. Wood dominates in the oak cladding of the atrium and the doors and partitions of the open office spaces. Additional accents are offered by special rooms, like the blue-painted double-height lobby with views of St. Sebaldus or the Market Square cafe, highlighted with green walls and colorful concrete tiles.
When it comes to energy performancethe original walls of the building have been thermally insulated wherever it could be done without affecting the fabric of the protected building, while the new parts meet passive building standards for insulation.

Do you have a pre-existing condition? Buying life insurance might still be possible