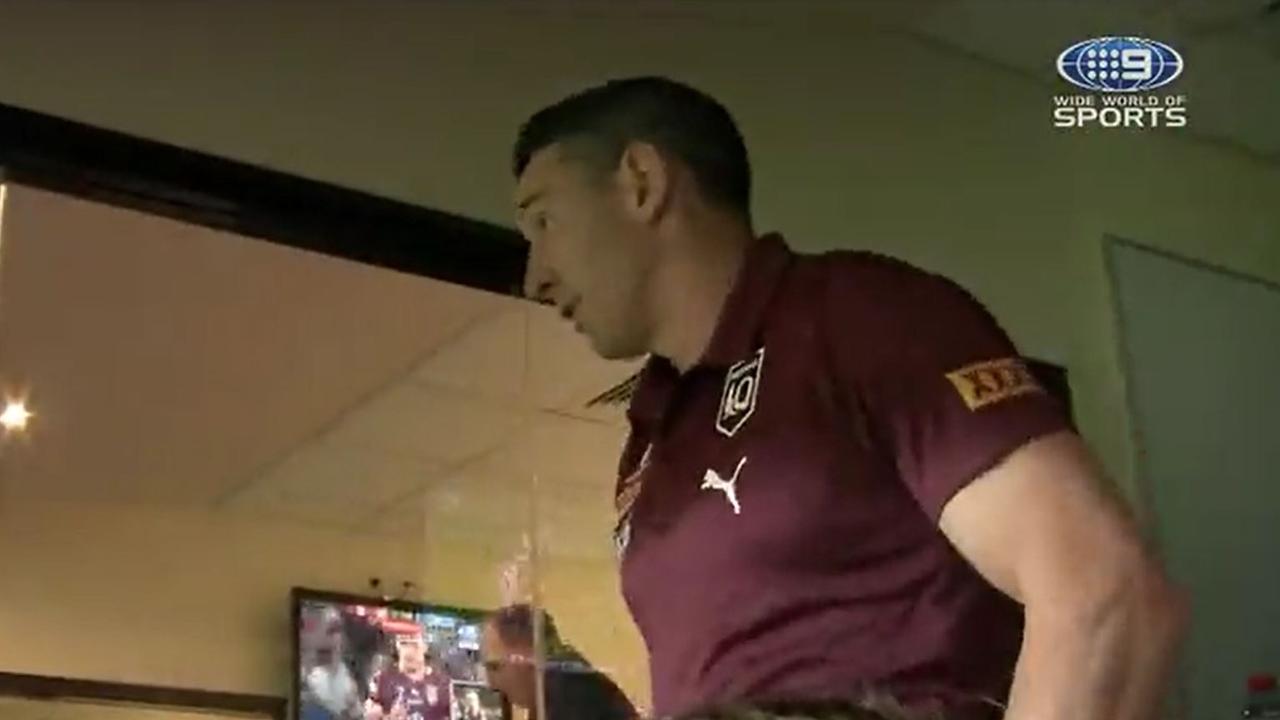 It’s been a bogeyman for footy fans of all series, but Channel 9 continued to attempt mid-match interviews during State of Origin III, much to the dismay of viewers.

As Queensland raced to one of the most heroic and brave wins in Origin history on Wednesday night, some accused the broadcaster of going too far.

Queensland coach Billy Slater and Blues mentor Brad Fittler are both contracted to Nine as commentators and pundits and throughout the series the network caught up with them live in the box to get their thoughts on the progress of each game.

A clumsy attempt to speak to Fittler during a tense moment in Origin I fell flat and drew the ire of viewers and there was an angry response on social media during Game 3 when another effort missed the target.

Queensland were rocked in the opening three minutes when Selwyn Cobbo and Lindsay Collins were both sent off the game after suffering brutal head-butts, setting the stage for a display of bravery from the Maroons.

Slater was under the pump more than at any other time in this series, knowing that his team – which already needed to bleed two debutants and had to deal with the loss of top player Cameron Munster to Covid – was down to two. men on the bench.

Just 12 minutes into the tiebreak, there was another stoppage in play when a fight broke out between the two teams, after Queensland pushed NSW in their in-goal and forced a retirement. It had been less than 10 minutes since the Maroons lost their second player for the game to a concussion, but despite that, Nine crossed at Slater – only for technical difficulties to thwart them.

“Let’s go to Billy Slater. Thanks for your time, Billy. Obviously you’re worried with two players gone early for the rest of the game,” commentator Mat Thompson said.

When he didn’t receive a response, Thompson added, “Okay, we just have a little problem, but we’ll talk about Billy. I’m sure he has enough on his plate, trying to juggle all the pieces.

“It’s also alarming that Billy has watched all the shows.”

Viewers took aim at Nine for trying to talk to the coach mid-game, particularly when Slater was still dealing with the fallout from his early injury crisis.

May Konstantopoulos, who runs the popular and respected social media account @LadiesWhoLeague, tweeted: “Leave Billy alone – his team is about to go on the attack. Now is not the time to chat.

Broadcaster Chris Coleman wrote: “I was thrilled when it fell through. Nine seem to have forgotten that their coverage is about the game, not to the detriment of it.

Former NRL cheerleader Nat Sinclair said: “Don’t try, I repeat, do NOT try mid-match coaching interviews in a game where 47,394 players are out with Grade 1 concussions, please, channel 9.

Responding to someone who suggested coaches have enough to worry about without commentators on their ears, Sinclair added: “Legit especially in this game!”

Perhaps Nine learned from the accident, not attempting another cross for the rest of the game.

At one point Fittler left his box and headed for the touchline, but he couldn’t conjure up a Blues win as Queensland cruised to a famous 22-12 win.

The sister pitmasters of Jones Bar-BQ, made famous by Queer Eye, are selling their restaurant | KCUR 89.3