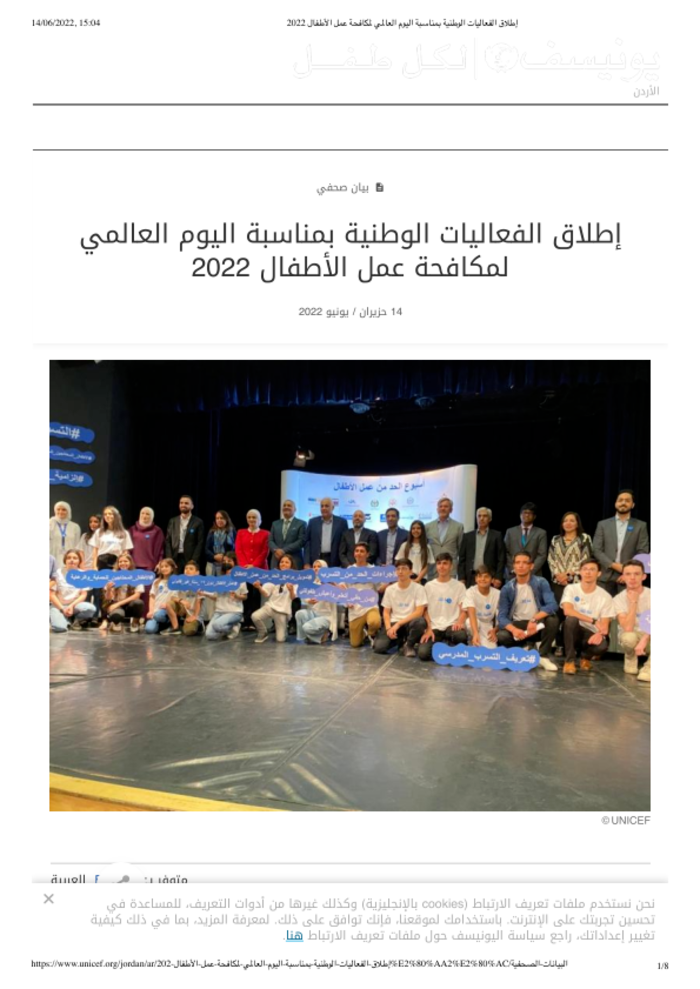 Amman, June 12, 2022 – Secretary General of the Ministry of Labour, Farouk Hadidi, on behalf of Minister of Labor Nayef Stetieh, launched a series of national activities on the occasion of the World Day Against Child Labor 2022 at the Haya Cultural Center. The 2022 theme of this world day, which falls on June 12 each year, is “Universal social protection to end child labour”.

Participants in these national events include Ministries of Labour; Education; and social development; the Department of Youth and Family Protection of the Directorate of Public Security; the National Council for Family Affairs; the United Nations Children’s Fund (UNICEF); the United Nations High Commissioner for Refugees (UNHCR); the International Labor Organization (ILO); Tamkeen for Legal Aid and Human Rights; Plan International; Arab Renaissance for Democracy and Development (ARDD); Land of men; the Jordanian Hashemite Fund for Human Development (JOHUD); International Medical Corps (IMC), Save the Children, Rowad Al-Khair Association and the Institute for Family Health (IFH).

All participating ministries, government entities, organizations and associations are existing members of the Child Labor Working Group and are implementing a week-long series of national activities, starting with a kick-off event, which included a panel discussion in which children from the Jordanian Children’s Parliament took to the podium to ask the panel members (selected decision-makers and relevant partners of the child labor working group) a series of questions regarding child labour. In addition, a freeze mob was led by JOHUD children.

During his opening remarks, the Secretary General of the Ministry of Labour, Farouk Al-Hadidi, announced that the Ministry of Labour, in partnership with the Child Labor Task Force, has launched a campaign for 2022 under the headline #StillACild to shed light on national efforts to tackle child labour, while focusing on the issue of working children and how to help them. Furthermore, Hadidi called for more national efforts to reduce child labor by governments, employers and workers, in addition to the involvement of the local community, civil society institutions and the media.

In addition, Hadidi indicated that the Ministry of Labor had created a specialized department to deal with child labor issues since 1999, corresponding to the time when Jordanian labor legislation was aligned with international conventions against child labor. child labor. The law prohibits the employment of children under the age of 16, as well as the employment of children in hazardous work environments before the age of 18, provided their hours of work do not exceed six hours per day and do not work nights, holidays or weekends.

Hadidi stressed that reducing child labor requires concerted efforts by all governmental and non-governmental stakeholders, in addition to the efforts of society, families, civil society institutions and employers in the commitment and application of all relevant legislations that safeguard children’s rights, in particular the right to education and attempt to minimize the number of children in the labor market in order to prepare them to return to school.

Miqdadi said that through his chairmanship of the child labor task force, NCFA has been able to coordinate and integrate the efforts of all parties involved.

He stressed that this event embodies the spirit of the participatory approach and is an opportunity to highlight the implementation of the national framework to combat child labor which was approved in 2021. This national working document defines the technical methodologies and the responsibilities of all parties involved with children. issues and mechanisms to respond to cases of child laborers, and provides comprehensive and integrated services in their best interests.

Furthermore, Miqdadi highlighted the importance of the government’s recent approval of the Child Rights Bill, which is one of the pillars of early childhood and a major achievement in ensuring the protection and child care.

Following Miqdadi, the director of the directorate of youth and community security at the Ministry of Social Development, Ahmed Al-Zaben, said that “child labor is considered one of the economic and social problems at local levels and international because of its close link with the rights of the child guaranteed by local legislation and international conventions”.

Zaben pointed out that the Ministry of Social Development is keen on providing a healthy environment and education for the child, as a child labor department has been established within the ministry and many agreements have been made with charities and partner institutions to provide psychological and social services. support for working children and their families after the transfer of cases by the competent authorities.

Zaben pointed out that there is a draft system for the protection of working children in violation of the current legislation, and this system will be sent to the Office of Legislation and Opinion to carry out the procedures for its application, indicating that the The importance of this comes in granting legal powers to deal with working children within a judicial framework that guarantees the rights and best interests of the child and guarantees this mandatory system. This system ensures a legislative mandate that ensures consistent and integrated enforcement, accountability and good governance in handling child labor cases for all institutions involved to achieve the best interests of the child.

The head of the Department of Education of the Ministry of Education, Nabeel Al-Hanaqta, said that the Ministry of Education is helping, in cooperation with partners, to provide alternative education opportunities for out-of-school children, stating that the ministry’s programs are aimed at removing children from the labor market and providing them with the necessary skills to empower them in society, while also taking the necessary steps to reduce the number of children who drop out of school in the first place .

After Hanaqta, the head of the Department of Protection of Minors and Family of the Directorate of Public Security, Colonel Firas Al-Rasheed said: “It is necessary to consider child labor from the point of view of its risks. and potential abuses, under conditions that can be detrimental to physical, intellectual and emotional health, in order to come out of a narrow point of view by looking at the simple financial return, and seeing that the social return of investments in the education of children, especially at the primary level, indicates that a reduction in illiteracy contributes directly to an industrial and technological renaissance”.

Rasheed added that children’s lives away from exploitation and danger contribute to cognitive, emotional, social and moral development, in addition to healthy physical development which improves their psychological and social balance and limits violence in all its forms. .

Plan International Jordan’s Head of Technical and Program Quality Department, Hamida Jahama, said: “Through our interventions, we seek to reduce the risks for child laborers while strongly focusing on young girls for children. support and protect them. This requires the application of holistic approaches. that we believe in and through working directly with the children themselves.”

Jahama also noted that the first circle of support for these children are their parents and society as a whole through campaigns and community initiatives aimed at reducing the worst forms of child labour.

Tamkeen’s Executive Director for Legal Aid and Human Rights, Linda Al Kalash, reported that Tamkeen is implementing a program on child labor and begging issues, titled “Preventing and Minimizing Child Labor Children in Hazardous Sectors in Jordan”, which aims to develop the institutional capacity of entities working on child labor and begging issues, and also aims to gain support by increasing overall technical capacity through training on aforementioned issues.

Mariyampillai Mariyaselvam, Head of Child Protection, UNICEF Jordan, spoke about the organization’s commitment to the Jordanian government to help eliminate all forms of child labor in Jordan: from working with NCFA to coordinate efforts under the national framework work on child labour, to the Ministry of Work with businesses, landlords and communities to prevent child labour, as well as to support the Ministry of Social Development in providing multi-sector services to working children.

“Child labor robs children of their childhood and their true potential, while depriving them of their rights to education and protection. UNICEF is committed to supporting the Government of Jordan and its partners to end to all harmful forms of child labor and to give children the future they deserve.”

Khan underlined the commitment of the ILO to intensify work to accelerate stakeholders’ efforts to prevent and eliminate child labour, prioritizing the worst forms of child labour, particularly in the agricultural sector. , making decent work a reality for adults and young people above the minimum legal working age, as well as recognizing children’s rights to education and ensuring that everyone has access to education and free, quality, fair and inclusive training.

Finally, the UNHCR representative in Jordan, Dominik Bartsch, said that data and research indicate the precarious situation of refugees and that a percentage of families try to adapt through very negative strategies, which may include child labor. children.

He underscored UNHCR’s commitment to working with local stakeholders and national institutions to identify the causes of this phenomenon while providing practical solutions to mitigate these harmful practices.