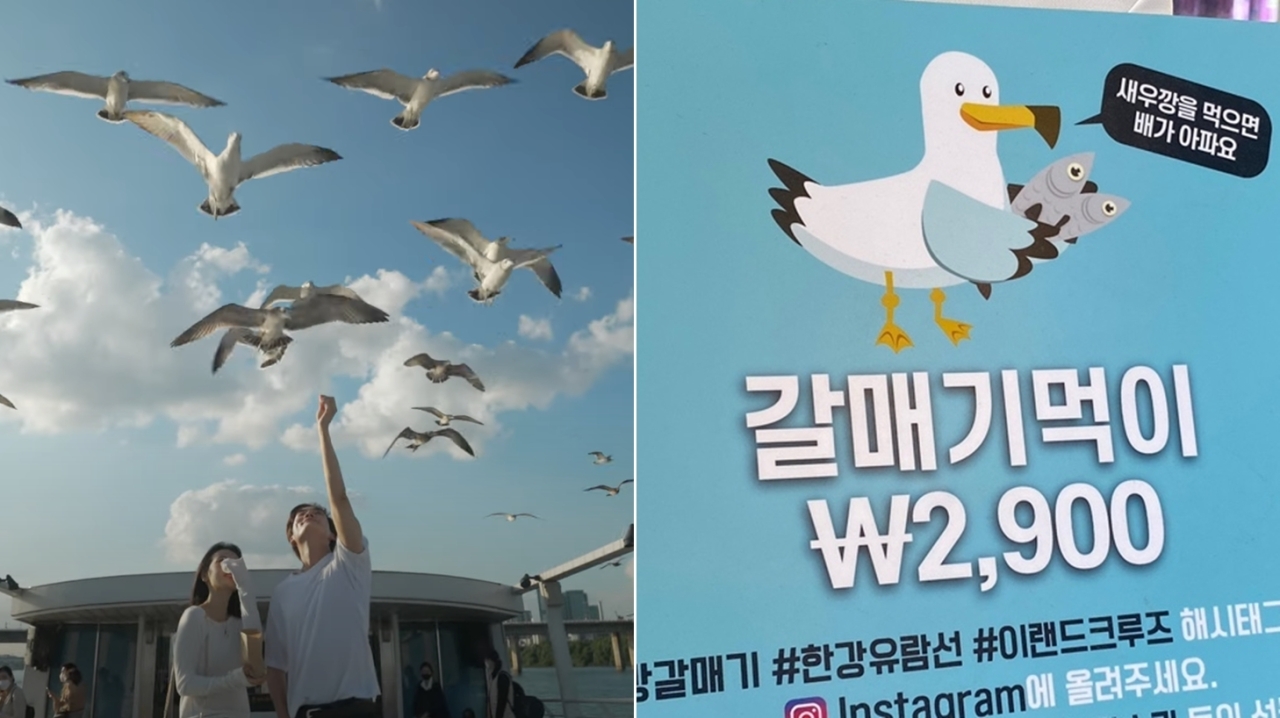 By Rose V. King Last updated Jun 27, 2022
Share
As a Han River cruise ferry was about to leave the dock on a Tuesday afternoon in June, dozens of seagulls began to gather.

Some sat on the top rails of the ship while others began to fly as passengers began to exit onto the deck. Once the engine starts you understand why they are there.

People held snacks with their fingers or threw them for birds to eat.

Laughter and cheers filled the ship as people of all ages – from the elderly to children and their parents – joined in the activity. Excitement was in the air. It took the whole 40 minute ride.

“The first time I saw Koreans feeding seagulls was during the Han River cruise. I didn’t understand it because in my country it is normally illegal to feed the animals, especially wild animals,” said Adrian Pacin from Spain who has been living in Seoul for a few months.

“Seeing everyone do it and the cruise being about it – you have snacks prepared for it and everything – I was quite amazed because it’s something very special.”

While searching for seagulls on YouTube comes up with videos with negative words in titles such as “thief” or “evil”, they seem to be widely loved by residents of major cities in South Korea who regard them as animals. that they can feed.

Feeding them as a form of entertainment is so well established that it is promoted as one of the highlights of Seoul’s famous river cruises.

“A trip through the Han River downtown. You can feed the seagulls,” reads the sign near the deck of E-Land Cruise, a river cruise operator.

“A lot of people think there are no gulls on the Han River, but you’ll see there are quite a few. It’s a popular program,” he said.

“Cruises in Europe and other countries offer a lot more to see on the banks and the rivers are much narrower. But the Han River is much wider and has less sightseeing to offer during the day.

“What makes us different is that we have a lot of seagulls,” Kim said.

Kwon Hyuk-doo, general secretary of the Korean Association for the Protection of Birds, explained that seagulls know what they are doing.

“They are instinctively aware that when they come to the cruise ferry they will continue to be fed and will not be in danger,” he said.

“If the people on the ferry have stopped feeding them and there is no cause and effect, the seagulls will stop chasing them. It seems (the relationship) started with people feeding the birds.

When did feeding seagulls become a thing?

Although the origin of feeding seagulls for pleasure is unclear, it must have been around for at least 20 years, judging by an old TV commercial from South Korean food manufacturer Nongshim. In fact, this particular company known for its famous Saeukkang shrimp-flavored cracker has clearly capitalized on the phenomenon over the years.

In the 2001 ad, a group of people on a boat fed Saeukkang crackers to seagulls. The tagline was “Even seagulls enjoy the taste of Saeukkang when I didn’t know it.”

“Although the exact time is unclear, it seems that feeding Saeukkang seagulls has become a popular activity at beaches and harbors. It seems that the connection between the two came naturally,” an official said. ‘company.

The snack became so strongly associated with seagulls around the country that there were even voices worrying about the possible negative impact on the birds’ health.

E-Land Cruise, for example, sells bags of anchovies on board the ship for seagulls, as the river cruise operator says Saeukkang can be bad for birds, giving them “diarrhea”.

Kwon said it’s hard to say conclusively whether or not it’s safe to feed seagulls snacks with food additives and chemicals. But he said giving them snacks for a short period of time on a short cruise should be fine.

“It can be an experience for people to learn that they co-exist with animals. For birds, it is also useful in times of food shortage.

When asked why seagulls are more popular than other birds like pigeons, bird expert Kwon said it was because seagulls do not affect the lives of people living in big cities. .

Fishermen and fish farmers don’t like gulls because they steal the fish they catch. But for city dwellers, it’s a bird that grabs food from its fingers, which many find amusing, he said.