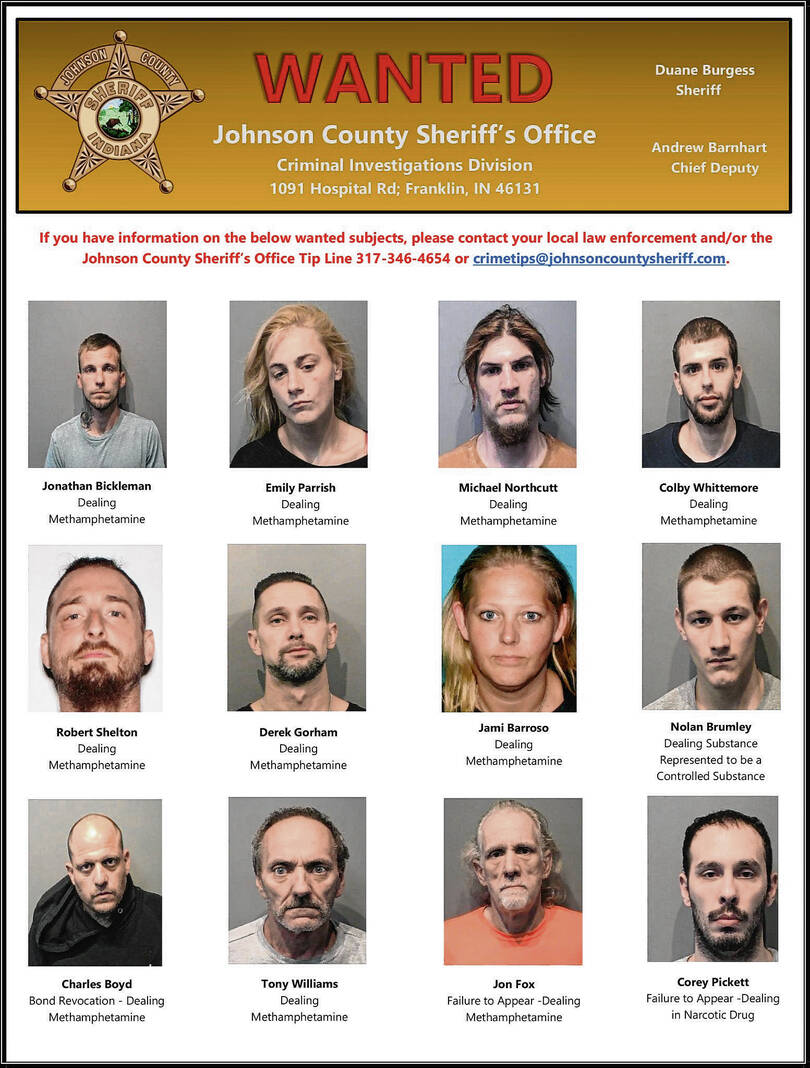 The Johnson County Sheriff’s Office is looking for 11 people wanted for drug trafficking or failing to appear in court.

Earlier this week, the sheriff’s office posted a poster on social media with photos of 12 people wanted on warrant, asking the public for help in locating them. A person featured in the poster, Emily Parrish, was jailed in Johnson County Jail on Tuesday.

The remaining people are still being sought.

Eight of the remaining 11 people wanted for drug trafficking were targeted in a drug bust in August. On August 8, law enforcement officers fanned out across Johnson County to arrest more than 30 people charged with narcotics.

The wanted people from the roundup featured in the poster are:

The other three people on the poster are wanted for failing to appear in court.

Charles Boyd, of Plainfield, was charged with trafficking methamphetamine, a felony tier 2; unlawful possession of a firearm by a serious violent criminal, a felony level 4; resist law enforcement as both a Level 6 felony and misdemeanor; and two counts of leaving the scene of an accident as a misdemeanor on April 1, 2021.

A warrant was issued for his arrest on October 12 this year after he failed to appear for a court hearing the day before, according to online court records. More information on this case was not available before the deadline.

Boyd is in the custody of Marion County law enforcement, after being arrested on new criminal charges. The new charges led to his bail being revoked and a warrant issued, according to online court records.

Jon Fox, 57, of Shelbyville, was charged on June 7, 2021 with trafficking methamphetamine, a felony tier 3; trafficking in a narcotic, a level 5 felony; and operating a motor vehicle after a lifetime license was forfeited, a Level 5 felony. In August 2020, the sheriff’s office collected evidence that he allegedly entered into two drug deals in Franklin.

On one occasion, Fox allegedly sold heroin in a Franklin Quality Inn parking lot. A few days later, Fox allegedly sold methamphetamine in a parking lot at Johnson Memorial Hospital. The deal was made within 500 feet of Custer Baker Middle School, which was in session, according to a report from the sheriff’s office.

A warrant for his arrest was issued on July 28 after he failed to appear in court. However, the judge assigned to the case – Douglas Cummins – was informed on August 31 by prison staff that the warrant had never been issued. He was later issued, according to online court records.

Corey Pickett, 33, of Indianapolis, was charged on May 17, 2021 with two counts of drug trafficking, a felony level 5. In August and September 2020, the sheriff’s office collected evidence that he reportedly made two drug deals in Greenwood.

On both occasions, Pickett allegedly sold fentanyl at a Dollar Tree in Greenwood, according to a probable cause affidavit.

A warrant was issued for his arrest on August 17, 2021 after he failed to appear in court for an initial hearing, according to online court records.

If anyone has information about anyone wanted by the Sheriff’s Office, they are encouraged to contact their local law enforcement agency and/or the Johnson County Sheriff’s Office hotline at 317-346- 4654. Tips can also be emailed to [email protected]