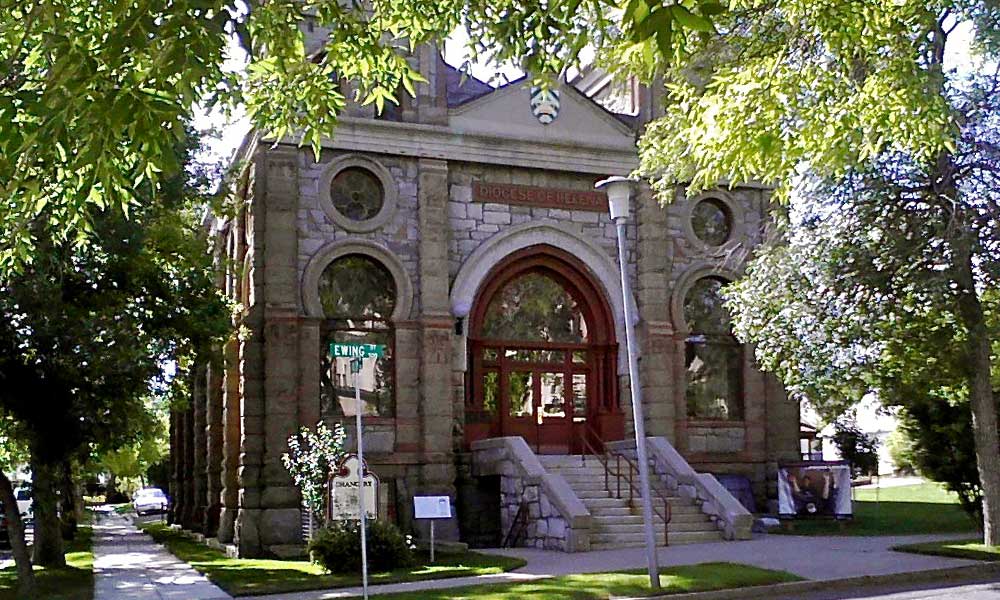 The Jewish community of Helena, Montana officially redeemed Temple Emanu-El, 87 years after the the original congregation has closed.

“We are thrilled to have pulled off this monumental effort,” said Rebecca Stanfel of the Montana Jewish Project, which purchased the property from the Catholic Diocese of Helena.

Stanfel and Catholic Bishop Austin Vetter signed documents formalizing the acquisition in a ceremony outside the synagogue on Aug. 19. A crowd of about 100 people watched.

“It is vital for all of us believers to focus on the good we can do together rather than our differences,” Bishop Vetter said. “My prayers go out to the Jewish community of Montana for God’s blessing in this new venture.”

Vetter and Stanfel declined to disclose the exact purchase price, which was originally $925,000. Stanfel said the Jewish group paid a “fair price” for the building. The church will lease land adjacent to Emanu-El for a nominal fee.

The Moorish-style synagogue was the first in Montana, built in 1891. At the time, it was the only synagogue between Minneapolis and Portland, Oregon.

Stanfel said the new incarnation will be the focal point of an effort to reach out to the broader community, Jewish and non-Jewish. Its revival comes at a time of rising anti-Semitism both nationwide and in Montana. The region, known as the Mountain West — Montana, Idaho and Washington State — has long been a breeding ground for white supremacists and the anti-Semitic Christian Identity movement.

“We know our work has only just begun,” said Julie Bir, board member of the Montana Jewish Project. “We look forward to fulfilling our mission, creating a National Center for Jewish Life, improving interfaith opportunities, combating anti-Semitism in Montana schools, and realizing the Jewish value of ‘fixing the world.'”

Jewish life in Montana dates back to at least the 1860s when Bavarian-born Samuel Schwab rode the first stagecoach from Salt Lake City to sell needed materials to gold miners in the boom town of Bannack (now a ghost town). He was not alone. Dry goods merchant Lewis Hershfield opened a bank in Virginia City (also now a ghost town), the first to convert gold dust into currency.

It was a familiar historical pattern: a sudden economic boom created a gap in the supply chain that Jewish merchants were only too happy to fill. Beginning as peddlers, Jews brought clothing, an assortment of other dry goods, liquor, tobacco, and much more to the budding frontier towns.

Although Jewish commercialism sometimes spawned anti-Semitism, evidence suggests that relations between Jews and Gentiles in Montana were commercial, if not downright cordial.

When a crowd of Jews and non-Jews gathered in 1890 to dedicate Temple Emanu-El, the state’s first Governor, Joseph K. Toole, said, “We are laying this cornerstone toward the truth “.

Clothing merchant and congregational leader Herman Gans described the synagogue as “a gift to adorn the city we love.”

Gradually, Montana’s Jewish population declined as the Great Depression of the 1930s took hold. Temple Emanu-El closed in 1935. Its remaining rulers sold the property to the state for $1 on the condition that it be used for a “bon et bon”. social purpose. The state used it as office space until 1981, when it sold the building to the Catholic diocese.

The lure of Montana’s “Big Sky” open spaces and quiet lifestyle has attracted thousands of new residents in recent decades, including Jews. The state’s Jewish population is approximately 1,500. Many are in interfaith marriages, which will be the focus of programs at the recently reopened synagogue.

Martha Kohl of the Montana Historical Society, who is herself Jewish and part of an interfaith marriage, is among those celebrating the reopening of Temple Emanu-El. “It’s a significant building in Helena, and it’s wonderful to see it returned to the Jewish community.”

This story is an update of Amid anti-Semitism, Jews seek to redeem historic synagogue, which appeared on momentmag.com in July 2022. See this story for more about the history of Montana’s Jewish community and the background of the project.