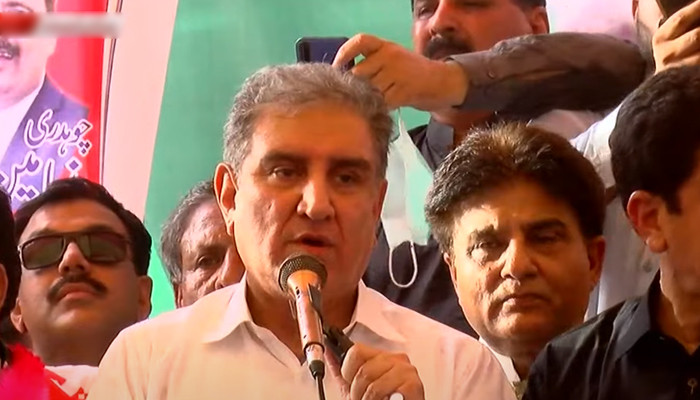 “Listen to me carefully,” he said, calling on the Afghan official, “Pakistan has played an important role in helping to achieve stability in Afghanistan”.

The foreign minister’s comments came during his address to party workers in Multan, where he spoke on several fronts, including the Afghan peace process and the progress of the Financial Action Task Force.

“Afghanistan’s National Security Advisor Should Reconsider His Statement [against Pakistan]; it creates obstacles on the road to peace “, declared the Minister of Foreign Affairs.

Qureshi said the world has recognized Pakistan’s role for peace in Afghanistan.

Progress of the FATF in Pakistan

The Foreign Minister said Pakistan was placed on the FATF graylist in 2018, and alleged that some politicians had made efforts to have the country’s name on the watchdog blacklist.

“At the last FATT meeting, it was noted that Pakistan had taken concrete steps to curb [money laundering]”said the foreign minister, adding that there was no longer any justification for keeping Pakistan on the gray list.

The foreign minister hoped the country would move towards the white list soon if the decision is based on merit.

What did the Afghan NSA say?

Last month, The news, citing a foreign publication, said senior officials informed him that Pakistan had informed Afghan leaders that it would no longer conduct official business with Mohib because of his recent “abusive rampage” against Islamabad.

In a public speech last month in the eastern province of Nangarhar, near the Pakistani border, Mohib not only repeated his allegations against Islamabad, but called Pakistan a “mess.”

His remarks outraged the leaders of Islamabad, who denounced them, claiming that they “degraded all standards of interstate communication”.

A senior Pakistani official with knowledge of the case told the media on condition of anonymity that Pakistan had lodged a strong protest with the Afghan side and expressed “deep resentment” in the country over Mohib’s “unworthy” remarks. .

In a video clip of the speech posted on social media, Saleh claimed that a “Western leader” recently telephoned Ghani and told him that Pakistan did not want to work with a “Pashtun leader in Afghanistan”. The vice president did not identify the foreign leader or name Mohib, but the Afghan national security adviser is an ethnic Pashtun.

Mohib, at a press conference last month in Kabul, was asked to respond to reports that Islamabad had ended official relations with him.

“My team has seen media reports attributed to anonymous individuals. So far, the Afghan government has not been officially informed of the matter, ”the adviser said.

“The Afghan government will respond to them through the appropriate diplomatic channels whenever information is officially released to it,” Mohib added.

On May 17, the Pakistani Foreign Ministry (FO) expressed serious concerns about “irresponsible statements and baseless allegations” that Afghan leaders have made against Pakistan.

Foreign Ministry spokesman Zahid Hafeez Chaudhri said in a statement that Pakistan had expressed serious concerns to the Afghan side by making a firm demarche with the Afghan ambassador in Islamabad.

Pakistan stressed that the baseless accusations erode trust and vitiate the environment between the two brotherly countries and ignore the constructive role played by Pakistan in facilitating the Afghan peace process, the statement said.

The Afghan side was urged to make effective use of available forums, such as the Afghanistan-Pakistan Peace and Solidarity Action Plan (APAPPS), to address all bilateral issues.

The statement came two days after Afghan President Ashraf Ghani, in an interview with the German publication Der Spiegel, said Pakistan was supporting the Afghan Taliban through an “organized system” including logistics, financial aid and recruiting facilities.

“The names of the various Taliban decision-making bodies are Quetta Shura, Miramshah Shura and Peshawar Shura – named after the Pakistani cities where they are located. There is a deep relationship with the state, ”Ghani added.

When asked if he still believes in the Afghan peace process, Ghani said, “Peace will first and foremost be decided at the regional level, and I think we are at a crucial time to rethink. It is above all a question of involving Pakistan. The United States now plays only a minor role. The issue of peace or hostility is now in the hands of the Pakistanis.

Ghani also said that the Army Chief of Staff, General Qamar Javed Bajwa, “clearly assured Afghanistan that the restoration of the emirate or dictatorship by the Taliban is not in the making. ‘nobody’s interest in the region, especially Pakistan’.

“However, some of the lower levels of the military still hold the opposite view in some cases. It is above all a matter of political will,” he said.