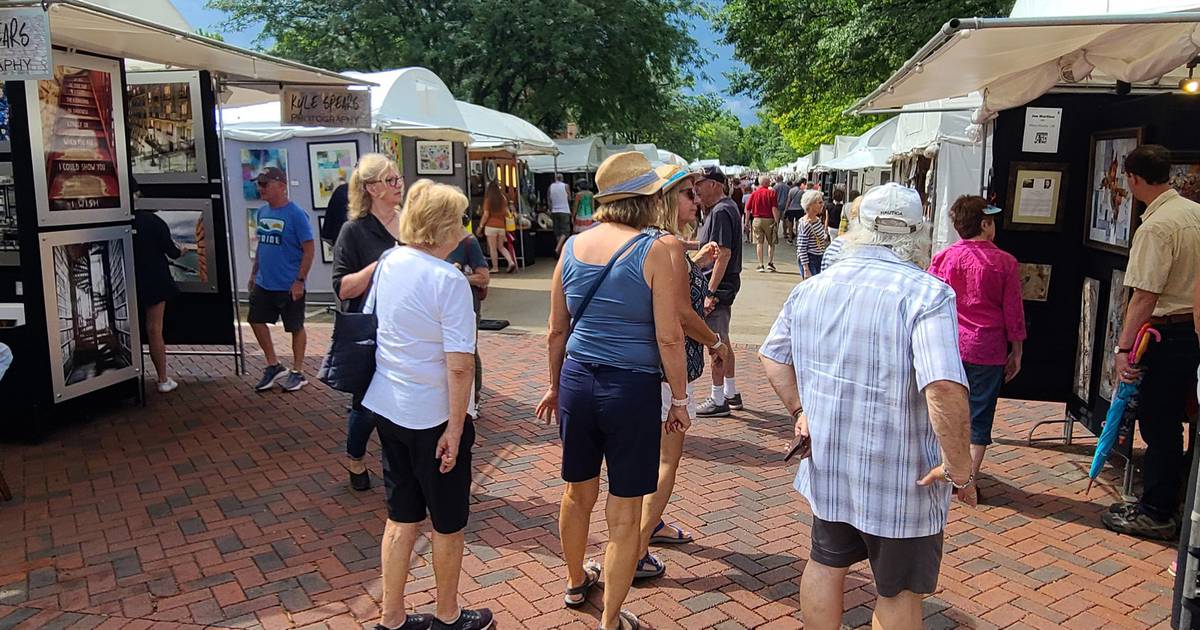 Elk Grove’s Serena Biggs was at the Geneva Arts Fair on Saturday hoping to buy something for her family members, including her in-laws and a nephew.

“I’ve never been to this art show before and I have a few unique people to buy from and I heard it’s a good place to shop,” Biggs explained as he strolled along. the walkway between the stands. “I’m sort of on a mission. I don’t know which stalls I go to because they (his family) are so hard to buy. I’m looking for unique arts and crafts. When I see it, I hope I know.

Art was on the minds of visitors to downtown Geneva along Third Street this weekend as the Geneva Chamber of Commerce, in cooperation with the city, offered the 20th annual Geneva Arts Fair from Saturday.

The fair continues from 10 a.m. to 5 p.m. on Sundays and features an eclectic mix of artists from across the country.

Geneva Chamber of Commerce communications manager Laura Rush said a scaled-down version of the fair was offered last year due to the pandemic and entries continued to be reduced slightly in order to provide more space for sellers and viewers.

“There was a time when we had about 150 artists altogether, but we’re down to about 120 now,” she said. “It’s not just a Midwest-based show — we literally have people from all over the country, including Texas, Georgia, Florida, Kentucky, and North Carolina.”

William and Lisa Bailey of Dripping Springs, Texas, said they’ve been coming to sell jewelry at the art fair for five years and it “is really well run and you can see a wide variety of people.”

“It’s working well for us and people are happy to be out,” William Bailey said shortly after sunrise after a storm covered the area until around 10.30am on Saturday. “Last year we won a jewelry award here. I sell a lot of enamel and also buy turquoise from a miner in Nevada who digs it by hand from the side of the hill.

Rush said “downtown traders preferred the scaled-down version” and the Chamber plans to continue the slightly smaller format for the fair.

She said visitors include those who enjoy looking at art as well as those looking to buy.

“I think you get both – there are people who like to walk around the art fair and see what’s there, but you definitely see people walking away with little bags of jewelry, big paintings and more,” she said. “We get calls – sometimes up to a year later – where people say they forgot to take the business card from someone who was in that place on that block because now we want to order a part. The good thing about two days is that people can browse on Saturday and come back the next day and buy.

“We have glass, wood, photography, paint, fiber, ceramics, jewelry and acrylic – basically anything you would want to see or buy,” she said. . “We have a coordinator to select the artists with whom we have worked since the beginning of the art exhibition and she is the one who selects the artists. There is always a waiting list – people are definitely turned away. The show was a bit bigger, but last year because of COVID we spread people out a bit more, so we had even less acceptance, so it turned out to be a bit more competitive.

Visitors like Paul Cameron from Geneva said he comes almost every year and was happy the weather broke a bit on Saturday morning.

“If something catches me, I could go home with it,” Cameron said as he checked the cabins. “I often end up looking. I like the formula. »

Robert Zadak and his wife Pamela of La Grange Park said they had visited the fair “five or six years in a row”.

Robert Zadak said he preferred ceramics, acrylics, oils and some prints and that he and his wife “have purchased several pieces over the years”.

“More often than not, we come home with something,” he said.

Jacki Quirin from Hinckley said she and her lifelong friend Joan Pool from Yorkville come to the fair every year and are always looking for something unique.

“They always have a lot of stuff here that you don’t see anywhere else,” Quirin said.

“I love ceramics and fiber art and I love jewelry,” Pool said. “I think the interest in art has never waned. If you see the crowds here, we always try to get there early so we can check things out.

David Sharos is a freelance journalist for The Beacon-News.